Boy, was that weatherman WRONG!!! Well, let me start the story at the beginning. 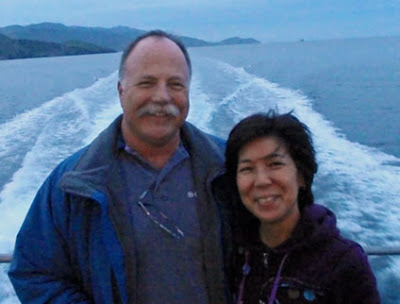 We left Friday at 4pm from Downtown Long Beach instead of Dana Point because Long Beach runs a dual hull boat... more stable so less chance of getting sea sick. But, the boat we were on stopped at Two Harbors before going to Avalon. It was a 2hr long ride. 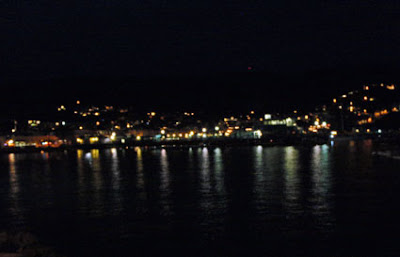 We got to Avalon late and had to walk to the hotel in the dark. It started raining about midnight and did it RAIN!!! 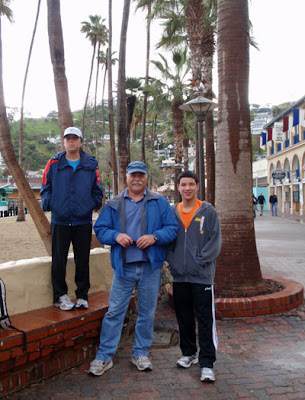 The next morning, the race boat from Marina Del Ray was supposed to arrive, but it was so rough and windy, the boat had to turn back. 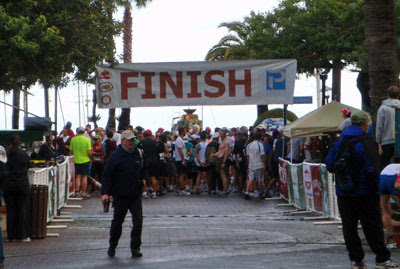 The skies were dry when Chris started the half-marathon. 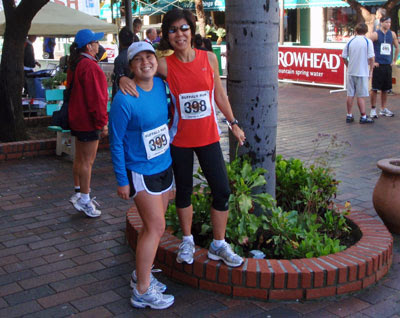 Cheryl and I started the 5K about 15 minutes after Chris left. The rain didn't start again until after Cheryl and I finished the 5K. Then it POURED AGAIN! The boat arrived eventually and there was another start for the half-marathon and the 5K. Both races were chip timed, so they easily factored everyone's times in together. 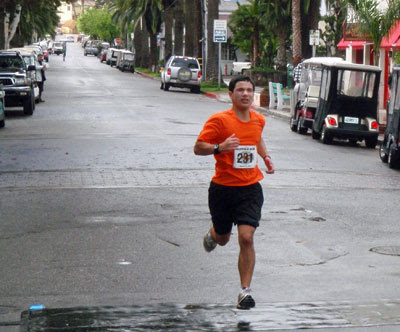 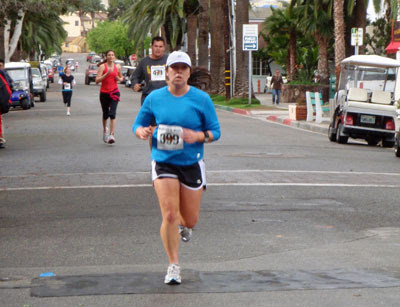 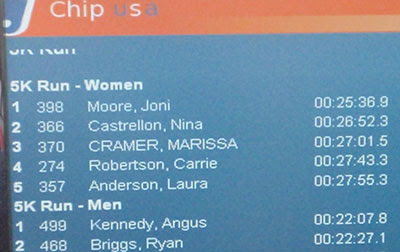 AND AHEM... Look at the 5K overall women's standings... I CAME IN 1ST OVERALL! I could not believe it! I was standing at the booth with the overall men's winner and he couldn't believe that he won either. I think all the good runners were running the half-marathon, but still.... YIPEE FOR ME!!! 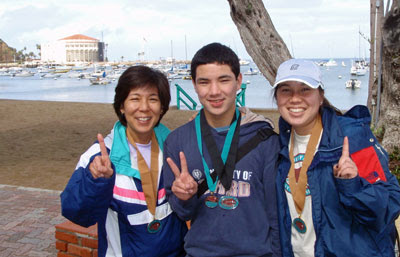 We almost didn't get home today... The wind and rain calmed down enough for the boats to travel again, but tsunami conditions were causing problems in Long Beach Harbor. The tide pulled back so far that there wasn't any water in the harbor to pull in at the dock. The boats were delayed so much that we were able to catch an earlier boat out of Avalon. Our boat had no trouble crossing and pulling into Long Beach, but we saw on TV when we got home that the tide had gone out again and the downtown dock was sitting in mud again. Whew! We just made it! 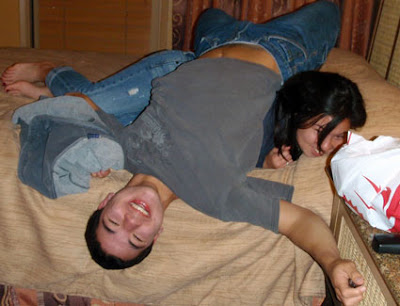 We're home now, showered, warm, dinner done, laundry done, and we looked at each other and asked, "Is it still Saturday?" It sure was a full day! Yahoo for sleep-in Sunday!

If you have made it through this HUGE post... thanks for hanging in there! I hope everyone is having a great weekend!
Posted by Joni M 5 comments:

Welcome! It's that time of month for the PTI Blog Hop! This month we were asked to lift a card/layout from on of the PTI designers. It was a hard choice but I decided on lifting the talented, Heather Nicols. I found this great layout on her blog. Instead of using pieced paper, I used a stripped paper from Scenic Route. It made this layout super easy!

We leave Friday at noon and the weather report is favorable! No rain in the forecast for Friday or Saturday during the race, YIPPEE!!! Chris and I are ready, and Cheryl's been training too! We are ready to ROLL!

Some Soccer and Some Scrapping

First, a Quake report... Cheryl's little girls are playing in the State Cup. After the last weekend of games, they've advanced to the round of 32. They played yesterday and won 4-1! This morning, they played the sweet-16 and WON AGAIN 3-0! These girls seem unstoppable! Until this afternoon where they lost in the quarter finals, 1-2. I asked Cheryl if the girls were disappointed and she said they were for about 10 minutes, then they got in line to do the bungee jumping... loss and tournament forgotten, LOL!

Look I scrapped again! I've wanted to do something with these photos for a while. He was less than thrilled of course, but a mom's gotta do what a mom's gotta do, hehehe...
Posted by Joni M 1 comment:

Well, here they are as promised! A whole crop of Crop Cards!

Starting with this card with fabric flowers that I made for my Sister-in-law's birthday...

This is an adorable stamp set from Hero Arts. I want to make an entire set of cards with these little cuties...

This little card is only 2.5"x3". It was for a mini valentine card challenge... and yes, I have a stamp set in Spanish.

I did this acrylic card for a card sketch. I repurposed the flower from a make and take from Scrapbook Expo a couple years ago. I just love how bright and beautiful it came out.

This one looked a lot better in my head than it did on paper. {sigh} Well, you can't win them all...
Posted by Joni M 2 comments:

I was scrapping a lot the past couple of weeks. So much so that it's too much for one post... Today I'd like to share the layouts I made (tomorrow I'll subject you to the cards) LOL!

I want to start with a crafty share. Look what I made! Brad Bracelets! I used a package of Basic Grey Sugared brads and made four valentine bracelets which I used as gifts for family and friends. I've been dying to make these since I saw them HERE. They came out so CUTE!

I had a craft week! Here is another sweet crafty share, Rice Krispy hearts. I got the idea HERE. The ladies at Bunco loved them!

Look at the flowers Jim got me! Aren't they BEAUTIFUL?!!

Look my hubby made me a card for Valentine's Day! Don't you think he did a good job? Cheryl said that Jim had some "not very nice words" for my die cut machine... The letters kept coming out backwards, and he was running out of paper! LOL!

Look what the kids made me! Peanut butter fudge! YUM!!!

And we had a sweet Valentine birthday today! Happy 8th birthday Leah!

I hope everyone had a WONDERFUL Valentine's Day!
Posted by Joni M 4 comments:

Welcome to Surf City. We had so much rain Friday and Saturday that Cheryl's soccer tournament was canceled. Sunday dawned bright and sunny, YAHOO!!! ... and cold {brrrrr}... As the sun came up it got warmer quickly; up into the 60's by the end of the half-marathon. It was a BIG race! The BIGGEST yet, with 20,000 runners! Oh, boy, was it crowded. When we crested a hill and looked down Coast Hwy, we could see a sea of runners in both directions!

Chris and I started together, but he soon left me behind. Chris's goal was a time in the 1:40's. He finished in 1:44 (including TWO port-o-potty breaks).

As we were running, Jim and Cheryl hung out eating donuts, and watching the sea of runners go by. They said it took forever for them to cross the race course. The runners kept coming and coming and coming...

As I said, it was beautiful in Huntington Beach! Here's Jim and Cheryl on the pier. Look at those blue skies!

Nicole over at the Papertrey Ink blog challenged us to make a card using the ink resist technique. Here's my simple little card.

I made good use of my ice cream cone stamp!
1) Stamp the ice cream cone using black ink.
2) Trace messily over the outline of the cone with white crayon.
3) Use a brayer to cover the crayoned images with pink ink (iron afterward to remove excess crayon)
4) Use a paper towel and add darker inking over the ice cream for added dimension.
5) I also stamped the ice cream cone on a piece of shrinky dink plastic and colored it in.

Thanks for looking!!!
Posted by Joni M 3 comments:

I logged enough miles to say I ran all the way across country... from Mission Viejo, California to Potter Hill, North Carolina! Now that I've achieved my first goal, I'm on to my next goal which is to log enough miles to run around the world. I'm making some stops along the way of course. My first stop will be Waimea, Kauai, Hawaii. That is where my Aunt, Uncle and Grandma live. I've got quite a head start because I've taken all the miles I've logged so far and applied them to the ocean crossing, leaving me only 266 miles from Waimea. I've moved the ticker from the top of the blog to the bottom. I am still keeping it up to date, but there won't be much activity on it, since I'll be spending most of my time in the Pacific Ocean. See you in Kauai!

Cheryl and the Quakes spent the weekend in Lancaster for the first round of State Cup. In 32F weather, surrounded by snowy mountains, the Quakes defeated the first team 4-0. Their second game ended in another win, 3-0! They played the toughest team on Sunday morning, but they were ready for them! They won again! 6-0!!! The undefeated Quakes move on to the "round of 32" in Temecula next Saturday. If they win their Saturday game, they'll play in the "sweet 16" on Sunday.

Rain is in the forecast for Huntington Beach on Sunday. We are keeping our fingers crossed for a change in the weather. Even though Chris and I like running in the rain sometimes, 13.1 miles in the rain is a long, long way....
Posted by Joni M 2 comments: