My friend, Mary, asked more about the floating islands. It was a fascinating place... definitely one of the highlights of the trip!

We arrived at the islands to be greeted by the Uros family living there. First stepping on the island I couldn’t believe how much you sunk into it and that it actually moves when people walk around.

The lake is full of reeds.

When there is a storm, the reeds get uprooted and float off. The Uros get in their boats and cut the floating reeds up into manageable sizes and drag them back. Here is a mini example of what an uprooted reed block looks like:

They tie all the reed blocks together and anchor them to the bottom of the lake.

Then they cover the island with cut reeds, criss-crossing them to make a thick base:

Then they bring in their houses...

And this is the whole happy family, living on the new island...

The people here also eat the reeds and make their houses out of reeds:

Here is what it looks like inside a typical house:

The entire family... in this case three people, all sleep in the same bed. And yes! That is a TV in the corner! Using money from tourism, they were able to buy a solar generator. Their favorite shows are soap operas :oD

They get insulted if you try to offer them money. Instead, they sell handicrafts to the tourists. Here is an example of their crafts:

They make their boats out of reeds too...

Here is us riding on the top level of the boat with a view of the island behind us. It's pretty rocky up there, haha!

A little more about the Uros... They dress like this every day:

The women wear pom-poms at the end of their braids. The color and size of the pom-poms indicate whether the woman is married, single, married but looking, or single but living with someone. So there is never any confusion:

Here is another island where we ended our reed boat ride. This island is more populated than the one we just left:

And you think that it looks like a beautiful day? Well, beautiful maybe... but COLD!!! 37F when we left the hotel this morning! There was still frost on the island when we arrived. The Uros are a tough people. They don't have heat and they don't even wear shoes.

Well, that's about it for the Uros and the floating islands. This along with the Amazon and Machu Picchu was definitely one of the highlights of our trip.

I was going to write musketeers, but I think that they're more like the three stooges 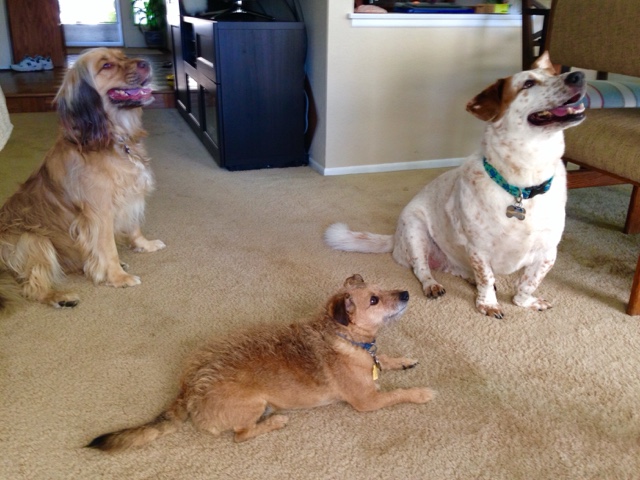 I found a few gems on my camera that I had to share:

Our first day in Lima, we were picked up at the airport by a representative and taken to our hotel which was adjacent to the airport. We didn't know where to eat, where to go or what was safe... so we ate at the airport... Papa John's Pizza for our first dinner in Peru, haha!

Here is a little more on the Amazon. Most of our Amazon pics are on the camera, because we hadn't gotten used to taking pics with the phones yet.

People use boats to get around in the Amazon. It's safer and easier than taking your machete out to walk the trails in the jungle.

Here is our guide Julio and his every present machete (which he does use often). He kept telling us to stay on the path because there could be all kind of bad things lurking under the top soil or grass. He grew up in the jungle, and he could call animals/birds and they would answer him... just like Tarzan :oD

After 2 miles of mud trekking, we had to transfer to these little boats. Weight distribution was very important, so Julio positioned us in a particular order.

Wash those Willies before getting in the boat!

Down the little channel...

There is a lot of wildlife around the lake. It's amazing how Julio can spot them... Howler Monkey, bats, turtles and all types of birds.

On our way back from Lake Sandoval, we saw some gorgeous butterflies, colorful mushrooms, and a toucan. We heard some Capuchin monkeys but didn't see them. We also saw several carts of supplies headed to the lake. Julio told us that there is another eco-camp on the shore. They have to cart in water and supplies every day.

When we got back to camp, we were covered with so much mud that we took a shower with our clothes on to clean them off. Then hung them on the rail to dry.

Oh, I didn't mention our cabin... it was raised off the ground (because of the bugs) and those yellow things wrapped around the legs keep the bugs from climbing up. We have a couple hammocks on the porch that we took advantage of during mid-day (when the mosquitoes were quiet).

The inside was comfortable... with mosquito nets over the beds. We had electricity from 6-10am and from 5:30-9:30pm. We also had hot water (most of the time). The water is heated by solar, so the idea is to take a shower as early in the evening as possible to get the hottest water (or else you get tepid) ;oD

We had our share of wildlife in our cabin. We had a frog who lived in the toilet. We named him Kermit...

Cheryl found a friend living in her shirt...

We also had a huge, fat, hairy spider under Cheryl's bed... it was at least 2" wide. I tried to catch it and take it outside, but it wouldn't get in the bag. I had to hit it with a shoe three times to kill it. (I used Cheryl's shoe, hehe)

Now, around the camp... We had huge lizards, tarantulas living in the trees, macaws looking for kitchen handouts, caimen, and a monkey that likes to ride around on a cat.

There were also agutis... large rodents who are very sweet...

And this is Lola... Want to know how we know her name is Lola?... Lola can talk! The problem is getting Lola to shut up...

And in the Amazon, always remember....

Hello Lima! You were a welcome sight after our terrible day yesterday. 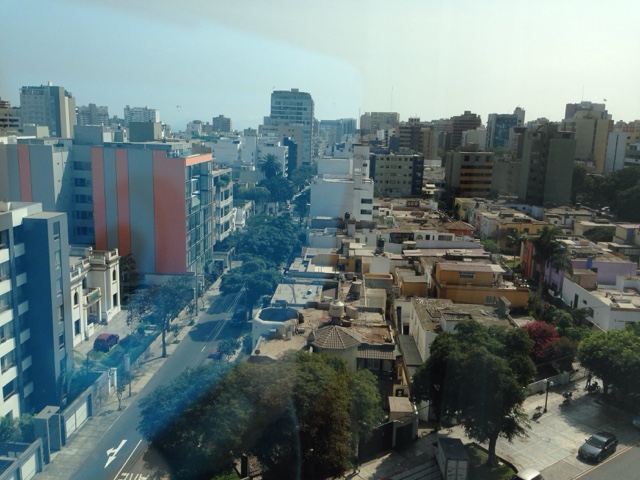 Cheryl made up a list of all the shopping we wanted to do here before we left... We did none of it. We spent the day in our room, in bed sleeping. We also missed our farewell dinner at the Largo museum. That couldn't be helped though, we were both too sick to go. 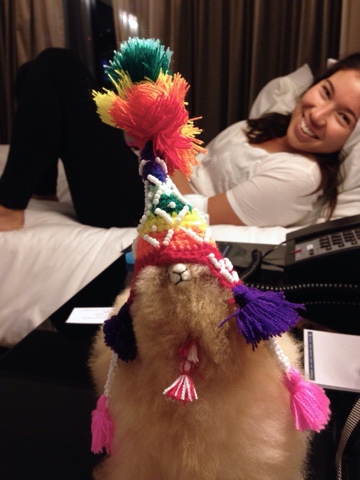 We are both feeling fine this morning though, and will go downstairs in a little while for breakfast. Then we'll pack up to head to the airport.
We'll see you all soon!
Posted by Joni M 1 comment:

On our way to Lima

Like I said last night, there is a strike in Jaliaca. Our flight boards at 8:05am,and usually the airport is only an hour away from the hotel. But today we got a 3am wake up call.
To make matters worse, Cheryl an I are both sick from the eggplant at dinner last night... We were both up for the few hours of sleep that we had available.
Our bus driver had to bribe his way through one strike blockade. The other two blockades that I saw, he managed to get around using side streets. I also saw at least one fire. I learned later that the strikers were burning tires
At the airport there were two large groups of police with 30-40 each holding blast shields. There was a long line to get into the airport, another long line for ticketing. We finally made it to the gate with only an hour to spare before boarding. Our tour director just told us that all roads to the airport are now closed. We just made it! Hooray for our tour director, Barbara! Hopefully the flight crew made it too and we'll be on our way to Lima.
Posted by Joni M 1 comment: Good morning, Puno! This is the view that we woke up to this morning. Bright, early, and COLD!!! 36F this morning. Time to layer up and catch a boat on the lake. 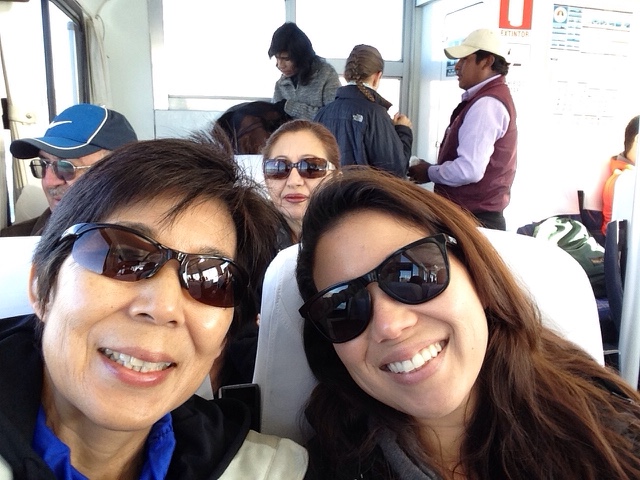 Our first stop are the floating islands of the Uros Indians. The islands and boats are built with reeds. They showed us a model and demonstrated how they built the island that we were on. 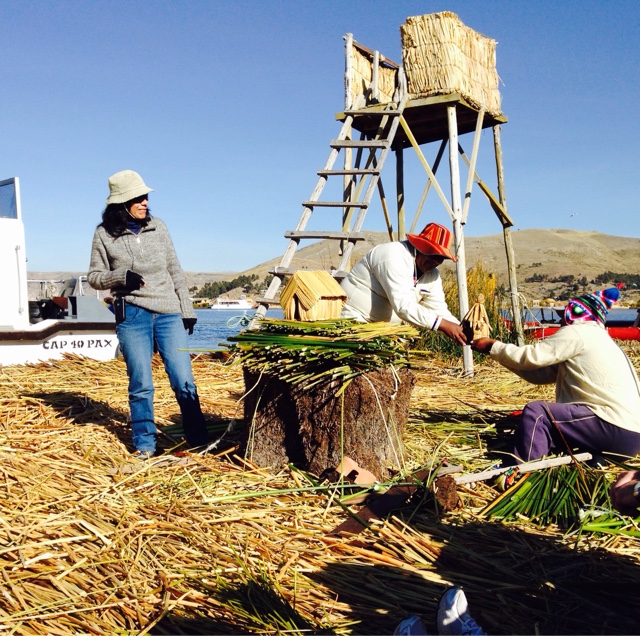 We got to meet the families that live on the island, except for the kids because they were in school. 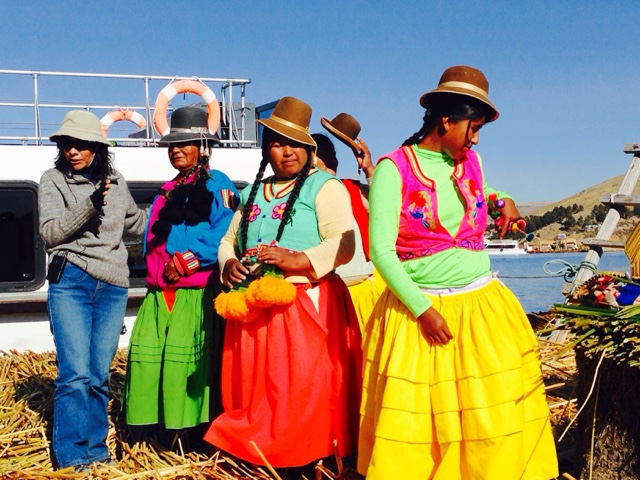 Our group was separated between the families and invited into their homes. Cheryl was dressed in typical Uros everyday wear. 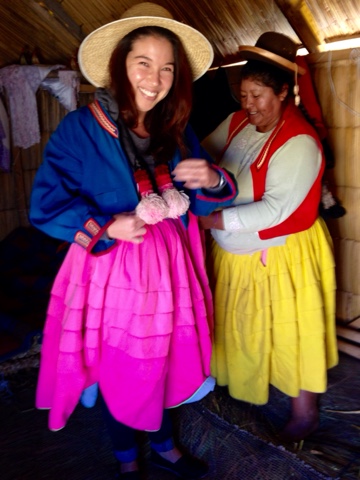 Then we took a ride in one of their reed boats. 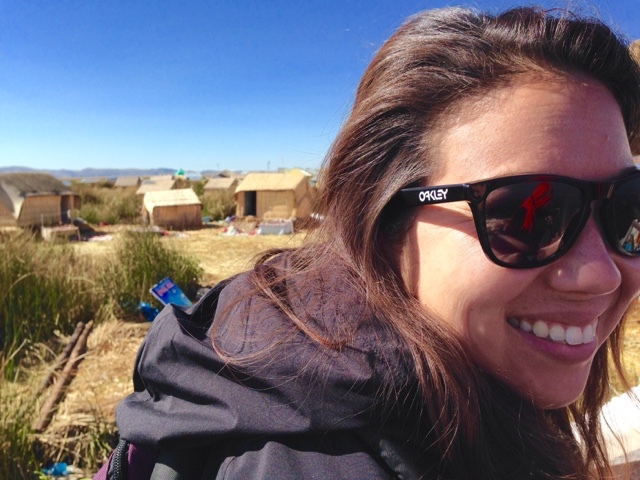 Across the channel to a different floating island. 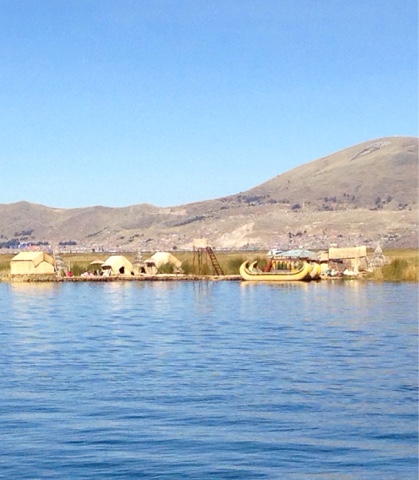 After we are finished with the Uros, we head to real island, Taquilla Island, to visit with the Quechua. 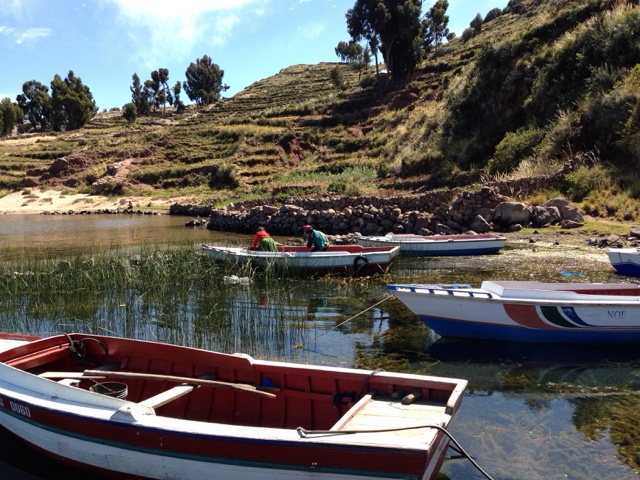 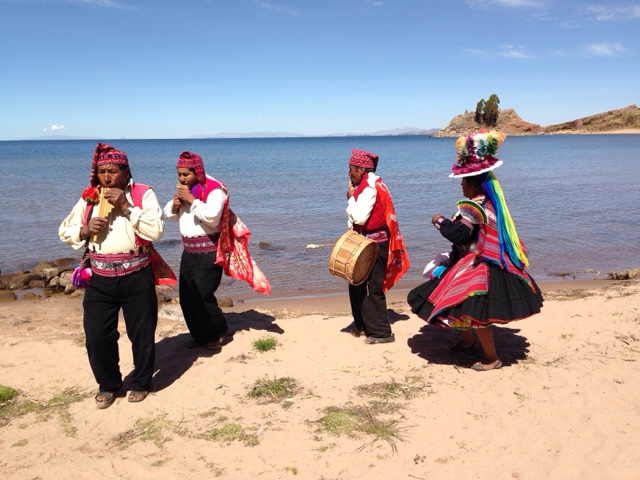 They made us a great lunch of freshly caught trout. It was WONDERFUL! Even Cheryl ate it all. 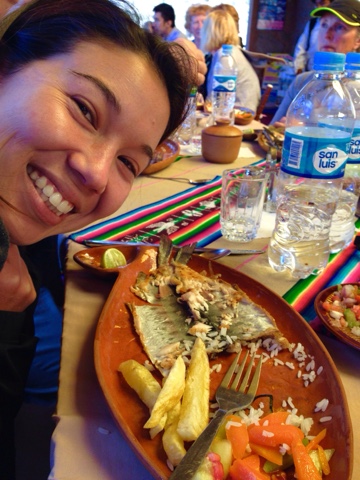 After that the boat took over an hour to get back to Puno. What is that? A Peruvian Alcatraz? 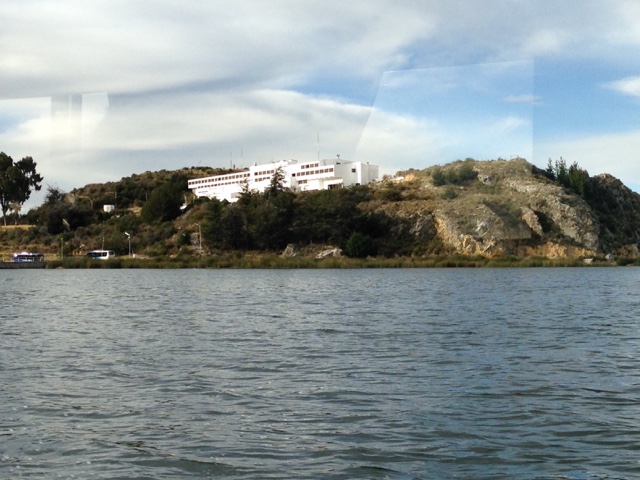 Ha ha, no. That's our hotel.
We got some news this morning which is changing our travel plans. There is a major strike going on in Juliaca. That is where we are supposed to catch a flight back to Lima. So, to try to get around the trouble, we are leaving the hotel at 3am tomorrow morning. They are expecting 27F ... Brrrr...
So, early dinner and early bed tonight.
Posted by Joni M 1 comment: