I'm a BIG follower of the PTI release week. They have a super talented design team, and I LOVE looking at their creations. This month PTI is giving us a chance to play along by using one of the DT creations as inspiration.

I fell in love with this creation by Nicole Heady:

I adore the colors and the design, so my card is as direct a lift as I could manage:

Thanks for stopping by.
I hope you have a great day!
Posted by Joni M 7 comments:

An Evening of Messy Fun!

Thursday night a local artist named, Jacki Long, came to Mission Viejo to teach a portrait collage class. I couldn't resist! I love the cabana art that she created for the community center... 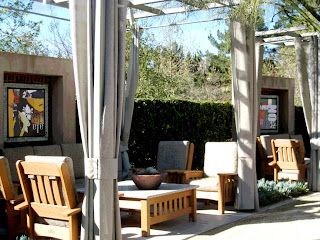 ... and the Mission Viejo Library card:

I met Jacki, seven very nice ladies, and one sweet dog at a night of art and fun: 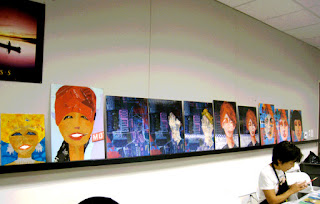 I know it looks like I'm by myself, but there were others there. They must have been picking out paint or digging through the huge tub of paper at the time the photo was taken, haha!

Here is my collaged girl. The background is painted, the face is a combination of butcher paper, sewing patterns and yellow tissue paper. The hair is torn tissue and napkins, and I used acrylic paint to finish the face.

If you want to see more art from the night, visit Jacki Long's blog.

I hope that everyone is having a great weekend!
Posted by Joni M 2 comments:

I had last Friday off, so Jim and I decided to go camping. Since it was too late to get a reservation anywhere, Jim left on Tuesday after the plumber left (we had a leak soaking the carpet in the hall). He found a really nice spot over in Wrightwood.

He picked me up Thursday night and we had a great time hiking the Pacific Coast Trail.

Our campground was right at the top of the Mountain High Ski Resort:

We had a nice evening... A little wine, roasted Starbursts and a gorgeous sunset.

And everything went well until about 2:30am... Jim started having stomach pains. We left for the hospital at about 4am. The Garmin said that closest hospital was an hour away. There had to be one closer! So we stopped at the fire station to ask directions. They were really nice and took Jim vitals, pronounced him stable and gave us the address of a hospital 30 minutes away in Victorville. After Jim was admitted I called the kids to see if they could come get Jena. It was going to be 100F in Victorville, so she couldn't stay in the car. Chris said that he would come; driving 2 hours to Victorville to pickup Jena. Then he took her home AND gave her a bath. Meanwhile, Jim was diagnosed to have a 6mm kidney stone... a BIG one! They were talking about admitting him and possibly surgery. After finding out we were members of Kaiser, they called Kaiser who wanted Jim transferred to one of their hospitals... so they transferred him to IRVINE! Oh, look! Jim's first SELFIE. :oD

When Jim left in an ambulance, 7 hours later... I took the truck back up the mountain to break camp and bring the trailer home. Cheryl and Armand offered to drive up and help me. The road was really rough, so it would have been hard for them to get up to the camp in a car. I told them that I had it covered. When I got back to camp, the family in the site next to us had heard us leave that morning. They came over and asked how Jim was. When I said that I was leaving, they all pitched in and helped me break camp. The dad guided me as I backed the truck up and hooked the trailer to the truck. I did check that the hitch was locked (you'll find out why that was important later). After giving the family a roll of toilet paper (of which they were VERY grateful since all the toilets were out) and waving good-bye, I headed back down the mountain. I drove more than a quarter of a mile before the trailer came unhitched from the truck... on a dirt road... in the middle of nowhere...

My first thought was pick it back up and put it on... nope way too heavy. Second thought, get the car jack... I couldn't find it. I figured that it must be under the camping box, which is too heavy for me to move even if it was empty. So I settled for lowering the stabilizers and trying to lift the trailer up with those. As I was in the process of cranking the stabilizers down, another truck came by. The guy saw what was going on and said, "Wow, that's a bummer... Do you want help?" YES, PLEASE!!! He had something called a "Farm Jack" in the back of his truck. I didn't know what that was, but it worked to jack up the trailer. Then I backed up the truck and he reattached it. He made sure that it wouldn't come off.

The rest of the drive was uneventful, but slow... it takes a long time to get anywhere at 55mph. There was no traffic, thankfully, and I got home around 430pm. No one was home, so I unloaded the trailer. Just as I finished, Chris drove up with Jim... the Kaiser hospital sent him home! During the ambulance ride, the kidney stone had made its way to the bladder. They gave him some meds and sent him on his way.

So all's well that ends well. The post in front of the trailer will need some repair, but Jim is fine. Chris really came through by getting up early to pick-up Jena, cleaning her up, and then going to pick-up Jim. Cheryl and Armand were so sweet to offer to drive all the way up to Wrightwood to help me. I have such a GREAT family! And I'm so thankful for the kindness of strangers... the family with two teenage boys in the campsite next to us, and a man driving by on a dirt road in the middle of nowhere. So, even though I can't say it was a HAPPY 4th of July... was definitely a BLESSED one!

I hope that everyone had a safe and wonderful weekend!
Posted by Joni M 1 comment:

I haven't posted anything for a while, so how about some running pictures... Here we are at Malibu Creek State Park last weekend, also known as BullDog.

It was supposed to get up in the 90F's that day, so we wanted to get an early start. A 6:30am start at BullDog means that we get up at 3:30am. It was really nice there in the early morning:

They filmed MASH there, and there are still some movie props left in the park:

And Cheryl has a new friend, named Armand. Aren't they cute as can be :oD

And why do they call this BullDog? Well, supposedly this rock is supposed to look like a bulldog. I don't see it, do you?

Cheryl and Armand, as they say, are eating hills for breakfast!

Have a GREAT 4th of July, everyone!